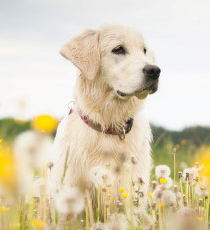 Helps against lack of energy as well as joint and movement problems such as:

Our pets, dogs in particular, have become very important family members. We care about healthy nutrition for the whole family and are aware that a varied and balanced diet is an important factor of wellbeing also for our pets.

Velvet antler products have been produced in the East for 2000 years in order to maintain health and to strengthen a weak body.

Meanwhile, velvet antler is appreciated also in the Western world as a food additive.

What is velvet antler?

Deer antler has the remarkable characteristic to regenerate on its own. It is removed from the animals every year on the culmination point of the so-called velvet phase in a gentle and painless proceeding by a licensed veterinary. Velvet antler powder is composed of the inner, cartilaginous germplasm of the antler.

Velvet antler for pets is 100% natural and consists amongst other of: